Review of intergalactic group Henge after a sellout performance at Albert's Shed Shrewsbury.

HENGE TOUCHED DOWN AT A QUARTER TO FIVE

Just in time to greet their human familiars with a ritual commonly found only on the exoplanet Zwark 5 and a small village on the outskirts of Salisbury. This was to the bitter disappointment of all those who had flocked to Stonehenge for a similar reason.

A welcoming party of around 50 humans joined Henge for a parade around Shrewsbury town centre to celebrate world music day and welcome in the summer solstice, which didn’t come with a spectacle of the rising of a new sun, but instead, fell upon us at rush hour on a Friday. A time where chants are more commonly filled with expletives. We presume those on the commute home via the A303 would be the perfect antipathy to the pagans and hippies huddled by that famous stone circle; projecting their good vibes before they jump back into their beemers and head back to the big smoke in time for the Monday morning hustle at the exchange.

Meanwhile back in Shropshire, a chorus of drums made from recycled materials seemed to appease the intergalactic four-piece who visited Shrewsbury to regale their special message through the music of Cosmic Dross. It’s a style that is hard to describe, yet feels like it’s part of our DNA with pulsating rhythms more akin to shamanistic world music than the heavily synthesised audiogasm that hits you square on the nose from the first note. Irresistibly danceable, hysterically dramatised and strangely poignant, Henge’s music and message relay a simple mantra:

“SAVE THE HUMAN RACE. DEMILITARIZE. AND COLONISE SPACE” 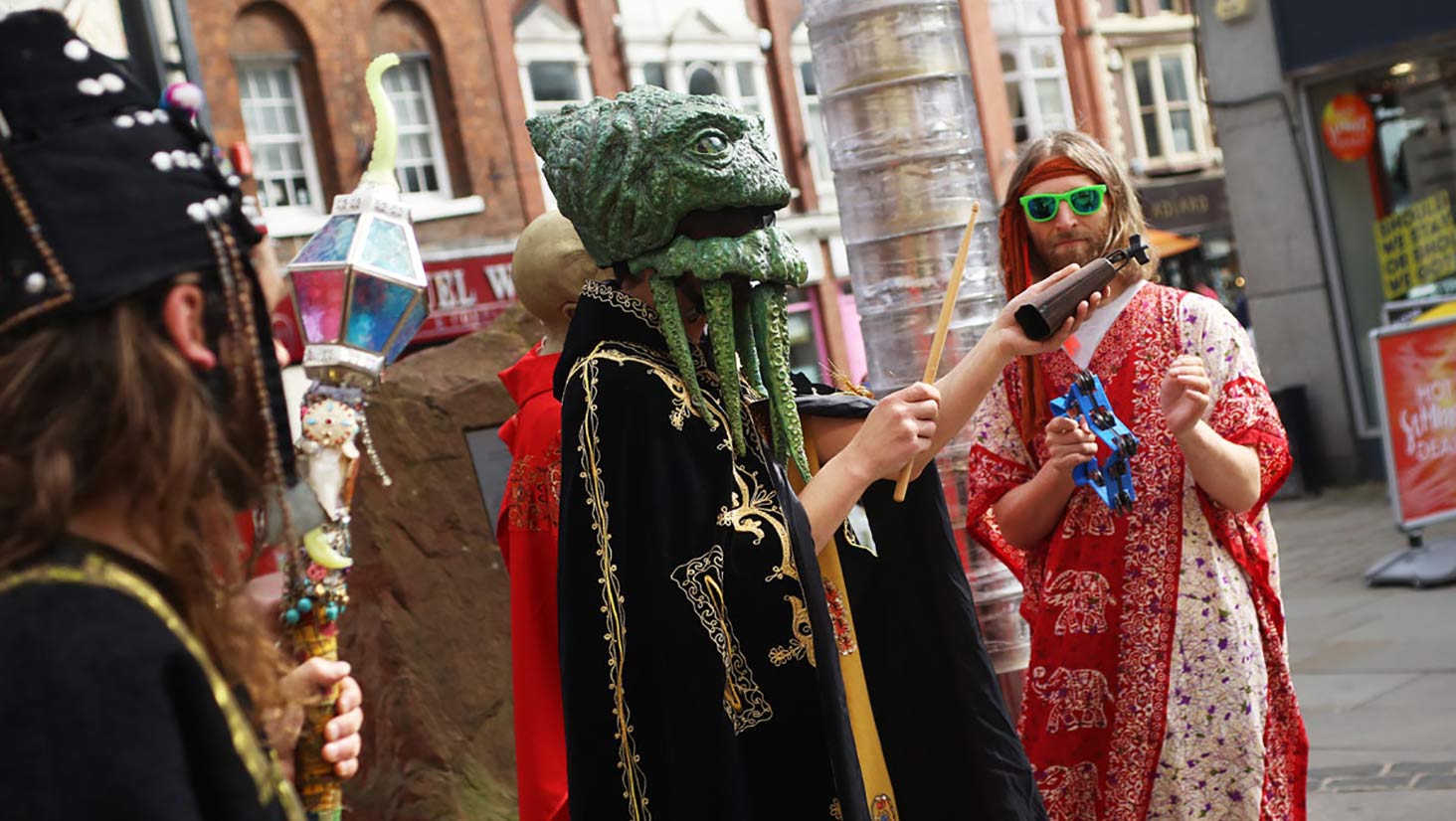 That message was received loud and clear in Shrewsbury with a sell-out crowd descending on Shropshire’s independent music venue, Alberts Shed. Over 200 revellers, adorned in their best extraterrestrial get-up, made the visitors feel at more than at home. The roar of applause and ear-to-ear smiles showered the artists with a glowing beam; had this been America with their overzealous orthodontics, this gesture could have been misconstrued as an act of war.

Zpor, Henge’s leader and frontman, however, is a being who demands peace, and the rabble took heed as the silence of anticipation overcome the crowd; there they stood, with bated breath, awaiting a command from the higher one.

AND THEN THEY LANDED

Henge’s opening track, ‘Unit of Power’ is a space dub oddity fluidly merging the prog-rock elements of Hawkwind with the electro stylings of Orbital. This a quickly followed by an array of songs that genre blend ska, techno, rock, with a smattering of 60s Shadows-Esq soloing and dirty synth lows that consume the airwaves, transmitting directly into each being with a welcome hit of dopamine.

Throughout their set, Henge raised the crowd up into an ecstatic frenzy with people from the front to the back all looking on with adulation. It’s hard not to respect these guys; not only is every note pinpoint perfect with almost telepathic accuracy but the whole backstory is a stroke of genius.

People were genuinely clinging onto every word that is said. At one point a young lady grew the desire for singularity and she stepped onto the stage. Zpor held steady, continuing his message to the disciples, but for the stage invader quickly became overcome with the enormity of being within close proximity to intergalactic beings and promptly fell over the drum kit and was helped off by a kind audience member.

Soon though, the evening was drawn to an end. Henge performed their final song, ‘In Praise of Water’ to a room that simply exploded in dance, not one foot held solid to the ground.

An encore of their anti-war song ‘Demilitarise’ ended with the band in the centre of the dancefloor and the audience participating by chanting lyrics read from placards in a Dylan ‘Subterranean Homesick Blues’ style and shaking homemade maracas.

At the end a piercing sound of applause fired out to Zpor, Goo, a grey-skulled Venusian, Nom, the squid-headed Xylanthian and the band’s only human, Kent Paxman expelled from the Shed’s doors with hope that one day we’ll be fortunate to be in their presence once more.

About the Author : Albert's Shed